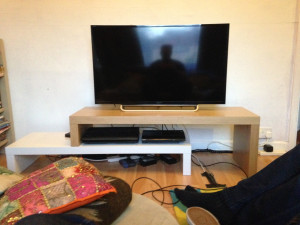 Some time ago I ordered a Cliff TV Bench by TemaHOME from flash-sale site MONOQI. It arrived this week and Thursday

olwy assembled it and he inserted it under the TV while I was at the Oxfam Bookshop that evening. My sitting room now looks super contemporary and cool.

Yesterday went in to town to pick top my bike after its five-week’s free service and buy the fancy chain oil recommended by them which I hope will make the chain less of a gunk magnet than my poor old bike. Had after-work tea and cake with

cleanskies. She has reached level 20 on Pokémon GO now. We sat in the corner of the Art Café in Bonn Square, neatly sandwiched between two PokéStops, and discussed recent trends in the interpretation of the Q in LGBTQ.

olwy and I watched Jupiter Ascending, which has a cameo from Terry Gilliam. Great fun!
Collapse